Over the past few weeks I’ve run a poll here at The Edublogger asking readers what they most want to learn more about. I’ve run this to help plan future posts while demonstrating how to use polls on blogs.

Two poll tools were used; so readers could compare the look of a PollDaddy poll with a Vizu poll. Both polls contained the same answers, except the PollDaddy poll had the extra answer — Process of Setting Up Blogs Within Your School.

A total of 663 people participated in the poll compared to 144 comments during this period (NB. Not excluding my comments). More readers (422) voted using the Vizu poll. Not surprising as it was embedded in both a blog post and the sidebar. Whereas 241 readers voted using the PollDaddy poll (only in a post).

Using blogs with students’ was the #1 response for both (41% votes – Vizu, 20 % – PollDaddy). While Blog design was second/third choice (Vizu/Polldady) ranking of the other answers varied considerably between the two polls.

Here’s how the Vizu graph looked: 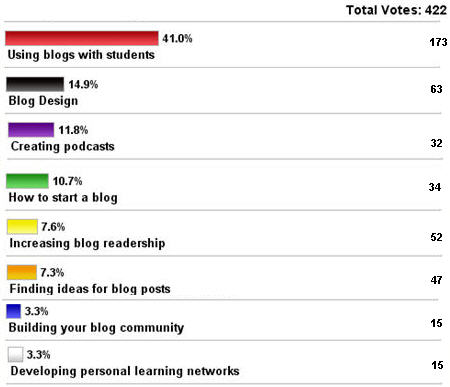 Compared to the Polldaddy: 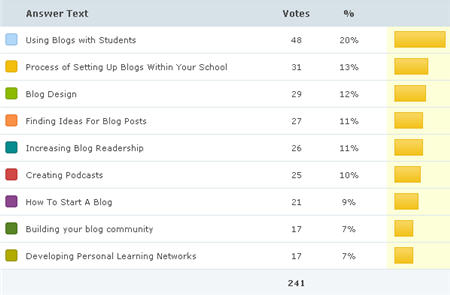 Tips to Remember When Using Polls

Plenty of ‘food for thought’ for the statisticians in our community especially when we take into account the extra answer and Vizu set to randomize the answers while PollDaddy wasn’t.

How did your polls go?  Which poll tools did you use? What was the pros/cons of each poll tools you’ve tried?

If you are enjoying reading this blog, please consider

12 thoughts on “What Do You Most Want To Learn More About? [Poll Results]”