Take a moment to think about this quote… 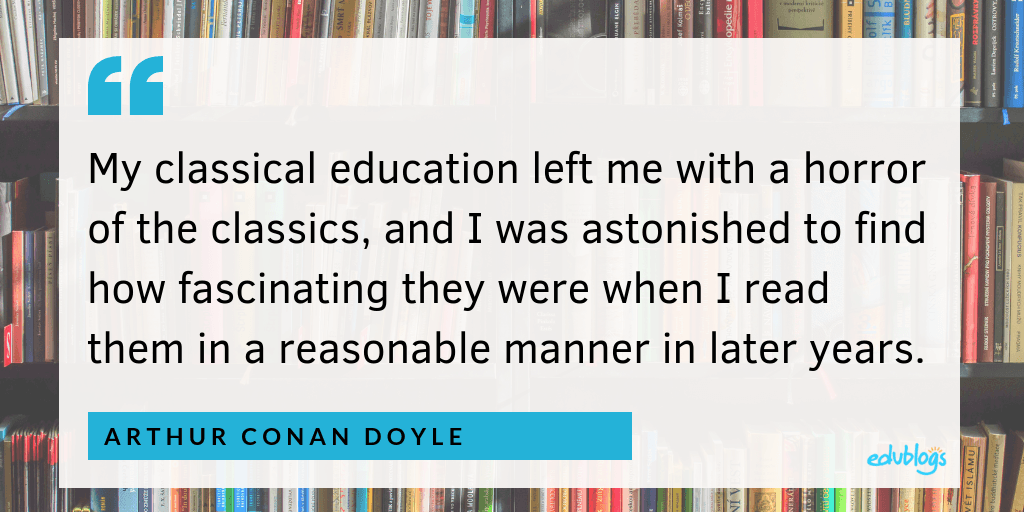 Sir Arthur Conan Doyle who wrote the Sherlock Holmes stories was lucky enough to rediscover his love of literature in his later years. Is this true for all students?

What role do teachers play in instilling a passion for learning and a love of reading? What impact do reading logs, chapter studies, exams, worksheets, teacher-generated questions and so on have on a students’ love of reading?

As an avid reader, I’d love to share an author I’ve recently come to appreciate with some lessons that may be useful to everyone in the education community.

Sherlock Holmes wasn’t the first fictional detective but he is the “most portrayed movie character” in history. The Sherlock Holmes stories have had a profound and lasting effect on mystery writing and popular culture.

Sir Arthur Conan Doyle, who wrote the Sherlock Holmes stories, has been credited as an influence to forensic science as a result of Holmes’ use of methods such as fingerprints, trace evidence, serology, ciphers, and footprints long before they were commonly used by the police.

Lesson — we’re not bound by what’s already possible. Anyone is capable of invention and creativity.

The first Sherlock Holmes story, “A Study in Scarlet”, first appeared in print in 1887 after it was rejected by about five publishers. It was finally accepted by Ward, Lock & Co, who specialized in cheap and often sensational literature, for £25 for the copyright.

The book was published in Benton’s Xmas Annual of 1887 and Arthur Conan Doyle never received any further money from the sale of the book. His follow up Holmes novel, “The Sign of Four”, published in 1890 fared slightly better but it wasn’t until Conan Doyle published Holmes as a series of short stories in The Strand magazine did he go onto to become a popular author — and the highest paid of his time.

Watch Treasures of the Sherlock Holmes Collections to see an original copy of “A Study in Scarlet” and to learn more about The Strand Magazine.

Sir Arthur Conan Doyle’s story is no different from others that go on to achieve greatness in any field — science, engineering, sports, or the arts; it’s more about practice and persistence than innate talent.

Conan Doyle’s literary journey didn’t start with his Sherlock Holmes stories and he didn’t give up when his stories or novels weren’t received as well as he would have liked.

This is why he continues to inspire new generations 88 years after his death and 131 years after the first Sherlock Holmes novel was published.

Lesson — we all have our own stories to tell or legacy to share. Sometimes the impact will be astounding.

On a side note, Sir Arthur Conan Doyle says in his memoirs that,

If I had never touched Holmes, who has tended to obscure my higher works, my position in literature would … be a more commanding one.

Conan Doyle even killed off Holmes in the “Final Problem” published in The Strand Magazine in December 1893.

Tired of writing about Holmes, he wanted to focus on writing what he considered more serious literature. On a practical level, writing out twelve short stories, each with unique plots, in a year would have been hard work.

Eight years later, in 1901, he published “The Hound of Baskerville” as a serial in The Strand Magazine set before Holmes dies in the “Final Problem” and in 1903 he resurrected Holmes in “The Adventures of the Empty House”.

Lesson — learn when to follow your heart and when it’s important to listen to others.

It’s impossible to do justice to Sir Arthur Conan Doyle and all his literary, and other work, in this short post.

Read his Sherlock Holmes stories! They are suitable for young adults upwards.

Being reluctant to read his stories after watching the different movie and TV adaptations, I now appreciate how amazing his stories are and how they’ve withstood the test of time.

My hardest part was working on where to start so here’s my recommendation of order to read:

You can read as individual novels or you’ll find them all in The Penguin Complete Sherlock Holmes by Sir Arthur Conan Doyle.

To learn more about Sir Arthur Conan Doyle refer to:

Reading opens up a whole world of new insights and perspectives. The joy of reading is too important to not instill or encourage in every student.

After reading this post, I’d love you to share one of your favorite authors with your students. Or perhaps tell them about Arthur Conan Doyle and Sherlock Holmes.

I also encourage you to leave a comment to tell us about the stories or authors that inspired you most. What lessons did you learn? These are conversations that should be had. 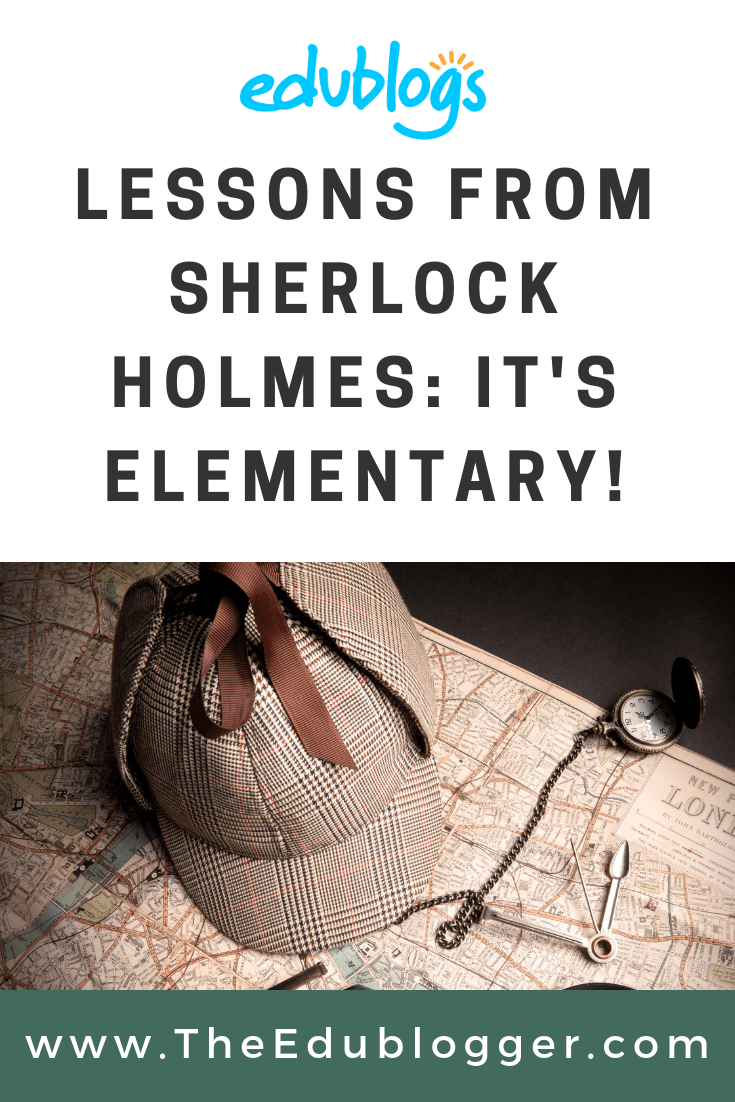 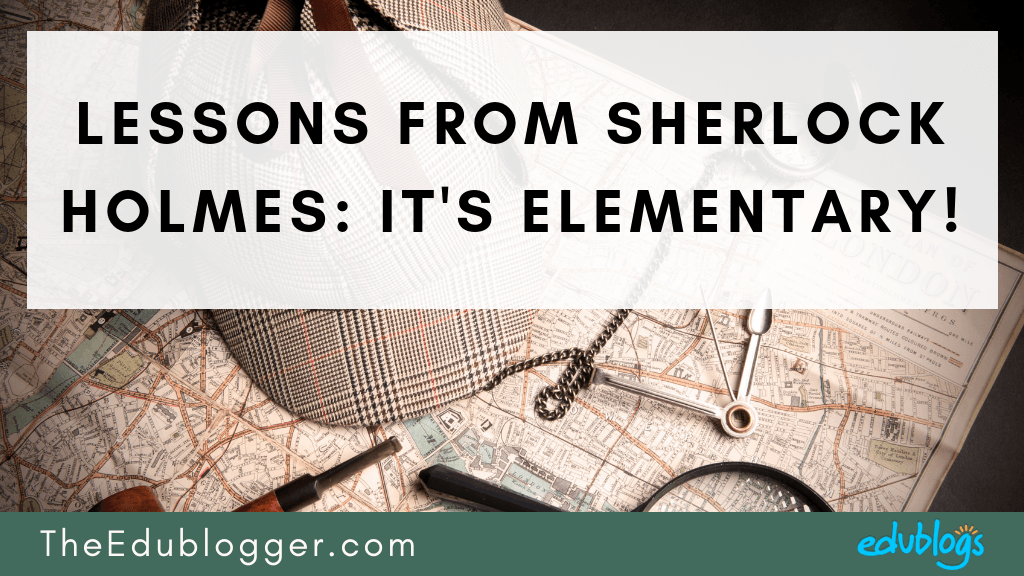